Through seven locked doors I travelled

with wrist and ankles in shackles

I found myself among those who society calls the criminally insane

within seconds a fight broke out

Because one man pissed on another

swarms of guards is all I could see

I thought to myself

these people are going to spend their life with me

because none of us will ever be free

who would soon become my card playing partners

in the hospital for the criminally insane

Indefinite detention is the name of the game

it’s a place for society’s throwaways

I wondered to myself

will I be here forever

because for the first time in my life

I was being indefinitely detained

“The yin-yang principle is not, therefore, what we would ordinarily call a dualism, but rather an explicit duality expressing an implicit unity. The two principles are, as I have suggested, not opposed like the Zoroastrian Ahura Mazda and Ahriman, but in love, and it is curious that their traditional emblem is that double helix which is at once the pattern of sexual communication and of the spiral galaxies.” ~Alan Watts

Stephen and I, it is as if we cannot become close enough to one another. After nearly 14 years, living every

moment right next to someone, spending every slice of now WITH someone, he becomes another half of you. It is like part of him merged with me and me with him. We are one another. Now we Know each other, like more than friends, like a chemical bond that would have to be chopped at with a machete to sever; like we are one brain, each one the left side and right side, interchangeably. As such, we are an evolved brain, because we have crossed the bicameral brake and are telepathically aware of one another, conversing, like a secret thought inside our minds, like a subconscious plunged into our psyches.

Perhaps if I explained love and sacred sex in this way—

The body can become a self-sufficient organism. It can achieve equilibrium, a stasis, utilizing exactly that which it produces as fuel waste, and reproduction of energy. A recycling organism, when the body is at its exact body mass index in relationship with gravity, electromagnetic force, centrifugal force, oxygen, etc.

Although, this equilibrium be self-sustaining; however, it can be temporarily unstable. Were the body to engage in sexual intercourse with another body of greater mass, energy transference tends toward the body of lesser mass. This would require a greater amount of fuel to be produced, from an external source, in order to compensate for the loss of thermal energy borrowed by the greater mass; hence greater expenditure of thermal energy. The body of lesser mass must metabolize calories at a faster rate than that of the body of greater mass, as it has a surplus of caloric substance to metabolize. The heat radiated off the lesser body mass must equal that of the body of greater mass, plus that extra required to transfer interactive exchange of energy during the intercourse with the heavier body. This is necessary to sustain the original equilibrium, and this is what make sacred sex so close to divinity. This intermingling, this reciprocating relationship of borrowing energy from one another.

“It is the movement between the negative and positive poles that creates electricity. It is the attraction between the male and the female that creates new life. The dynamics of the universe are dialectical, apparently in a conflict, but occurring within a larger context of unity and wholeness. This is the understanding of the Tantra vision.”  ~Margot Anand

The additional caloric intake must equal that of energy joules required to metabolize surplus plus original temperature (zero point energy) equilibrium in order to sustain stabilization of equilibrium.  Much like trying to sustain zero at the event horizon of a black hole to prevent structural and molecular collapse and excess temperature overload.  This is caused by what is called the Divine Love, which is that of giving more than you take; the act of completely letting go of one’s Self (i.e., the ego) and gifting one’s true and actual consciousness to the other, that other part of you. It requires more energy to function at a greater mass index relationship with gravity, electromagnetic force, centrifugal force, and oxygen, etc., which explains the borrowing of energy from the body of lesser mass, in order for it to sustain its equilibrium within its coordinate of space.

If we follow this theory of mathematical logic, it could be said that those bodies of mass index, are, in effect, decreasing the life energy of those at equilibrium body mass index. However, mathematical logic does not apply to Sacred Sex since bodies of greater mass index require greater energy simply to sustain an unstable relationship, should destabilize before the complete extinction of those bodies at equilibrium mass index. The difference between Labor Exertion and Work Effort, and the event that usually leads to orgasm.

The consciousness occupies the space of embodiment, which occupies the space along the 3rd dimensional grid. It requires a function of time to travel within the space of the body (Thought), and that to travel within the space of the grid (3rd plane). This relationship in total equals Temperature, and this is why when two egoless beings engage in sexual intercourse, the temperature can raise to a degree higher than that of both mass indexes, creating a bubble of high energy surrounding the interweaving, intermingling bodies, enough to electrify and condense the air, whether inside or outside of doors.

The coordinate of {0,0} remains constant within the space of the body or without the body (yet still remains a constant as long as it occupies space) within a dimensional plane. The grid of sacred sex and love is a multi-dimensional Tetrahedron. The motion of the conscience (i.e., diving love) is equal to the Golden Spiral, the Fibonacci sequence; a constant state of Theta. Which makes the grid equivalent to the Golden Rectangle multi-dimensionality.

“The feeling of being alive and at One with everything is available through the path of Tantra.  When your heart is open and you are making love, there is no separation between you, your partner and God.  This is healing sex.  This is connecting with the Divine.  And the important thing to develop is the sense that this sacred experience is available in all instants.  It is not limited to sex. “  ~Philip Smith

The question becomes: Does the grid occupy space? Or is it a measurement of space? If it is a measurement of Space (and/or Time) then what is Space? If space is unoccupied, is it still Space? What is non-space? One would surmise a vacuum, but does not a vacuum occupy Space? What does this have to do with non-existence, the concept of no Thing, and the concept of increation? And where, during the event of sacred sex, do these two, now one, body mass index travel?

Every body mass index is a black hole, a self-sufficient vacuum. Space surrounds the body coordinate, space is curved, relative to the coordinate {0,1} space does have a coordinate relative to {0,1}.  {1,1} is the coordinate of space.  This is measured by Time, which in turn is perceived by the conscience, and which, in turn, propels the single consciousness (as now two bodies have become a single body mass index) outside of the 3rd dimensional plane and into. . . that diffuse and diverse sine qua non area of Out, unSpace, unTime, total and complete awareness and consciousness, yet without awareness of opaque molecular structure.

During Sacred Sex with Divine Love we are now here and yet nowhere. We are the stuff only of illusions and the universe passes trails of energy between. I would need pages of equations to describe adequately, as words have no sufficient use. But it can only happen when individuals are without Ego, without Social Construct and without the ideologies, ideas, and general beliefs of Society’s Mayan Matrix.

As such, orgasm is does not mark the end of the relation, it is the entirety of it. It is the molecular sharing of energy, rhythm, frequency, and vibration. 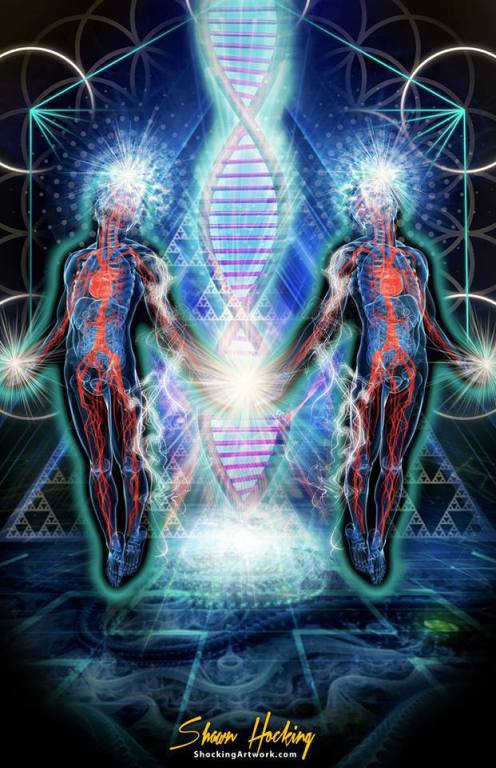 “I want our cells to braid together like living thread.” ~Isaac Marion, Warm Bodies

Please click on thumbnail in the gallery below to see artwork on black and larger view.

don’t know where I’ve been

seeing the seeing of sadness

drowning in the vomit of days lasting long

dreaming by the day

big sister wouldn’t have it any other way

sliding down the mountain tears drips into my eyes

razors edge is blinding gouging out my eyes

words mean nothing  neither do you and me

in the end it falls to the ground

freight  train gliding on rails made of mead

sailors without lovers only know greed

Sincere.  a : free of dissimulation : honest <a sincere interest>

b : free from adulteration : pure <a sincere doctrine> <sincere wine>

Note# Many people who suffer from OCD, Autism, Aspergers, Schizoaffective and/or Schizophrenia can be nothing but sincere. Their sincerity makes it difficult for them to live in society.

“The ultimate ownership of all property is in the State: individual so-called ‘ownership” is only by virtue of Government, i.e. law amounting to mere user; and use must be in accordance with law and subordinate to the necessities of the State.” 73rd Congress 1St Session Document No.43 , Senate Resolution No. 62

“But, indeed, no private person has a right to complain, by suit in court, on the ground of a breach of the Constitution. The Constitution it is true, is a compact, but he is not a party to it.” Padelford, Fay & Co., vs. Mayor and Aldermen of the City of Savannah 14 Ga. 438, 520

“The United States of America are a corporation endowed with the capacity to sue and be sued, to convey and receive property.” 1 Marsh. Dec. 177, 181

In the case of Dartmouth College against Woodward, 4 Wheat. Rep. 626, Chief Justice Marshall describes a corporation to be “an artificial being, invisible, intangible, and existing only in contemplation of law.

Law. A rule of action prescribed by a superior, which an inferior is bound to obey: 36 C.J. 957

Solitude. 1: the quality or state of being alone or remote from society : seclusion~Merriam Webster

A distinction has been made between solitude and loneliness. In this sense, these two words refer, respectively, to the joy and the pain of being alone.~Wikipedia

The ancient people understood that  our world is a circle, but we modern people have lost site of that. I don’t live inside buildings because buildings are dead places where nothing grows, where water doesn’t flow, and where life stops. I don’t want to live in a dead place. People say that I don’t live in a real world, but it’s modern Americans who live in a fake world, because they have stepped outside the natural circle of life.

Do people live in circles today? No. They live in boxes.  They wake up every morning in a box of their bedrooms because a box next to them started making beeping noises to tell them it was time to get up. They eat their breakfast out of a box and then they throw that box away into another box.  Then they leave the box where they live and get into another…

Law. A rule of action prescribed by a superior, which an inferior is bound to obey: 36 C.J. 957

Ego, Person, Corporation, Self, and Role are synonomous with what is commonly referred to as The System. The System is like a virus that creates and is governed by social conventions and platitudes.  The System is a game with no players—The System is the only player. Its software is downloaded into the human brain.

“I” does not suffer gain or loss.